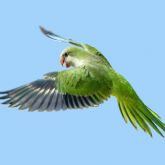 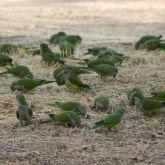 Native to South America, the monk parakeet is a popular cage bird around the world. It has escaped captivity and established feral populations in numerous countries. It is a significant pest in Florida, USA, where its large, communal nests cause millions of dollars of damage to electricity infrastructure.

Currently, wild populations are absent from Queensland. However, this species is privately kept here and, if enough birds escaped or were released, it could present a high risk of pest establishment.

The monk parakeet is not a prohibited or restricted invasive animal under the Biosecurity Act 2014.

a person must not release into the wild a monk parakeet that has been bred or kept in captivity.