A movement control order is in place in Queensland.

You cannot move bees, beehives, used beekeeping equipment or bee products (including unprocessed honey) to Queensland without a permit.

Use our Bee 123 online form to report your any checks you make on your hives. 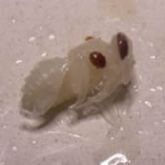 © US Department of Agriculture Creative Commons

There are 2 species of varroa mite, Varroa destructor and Varroa jacobsoni. These mites are tiny, the size of a pinhead, and they are a parasite of honey bees.

In June 2022, Varroa destructor was detected in the Port of Newcastle, New South Wales. Varroa destructor is responsible for the collapse and death of European honey bee colonies wherever it is present overseas. Honey bees are weakened by mites feeding on them as pupae, and adult bees often emerge with deformities.

Both species of varroa mite are listed as prohibited matter under the Biosecurity Act 2014.