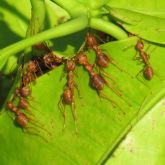 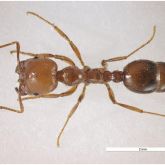 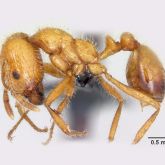 Tropical fire ants (TFA) are an exotic ant species in Australia. Originally from South America, they are now found in most tropical regions around the world due to human migration and trade.

They can be spread long distances within consignments in shipping containers and locally in the soil of potted plants, when moving plant materials or soil from domestic gardens or agricultural land.

These ants have recently been detected at the Port of Brisbane and an eradication program has commenced.

They were previously detected in South East Queensland in 2002 and eradicated.

They are now established at Ashmore Reef, Christmas Island, and the Northern Territory. They have recently been found in areas of Western Australia. They are established in most parts of Africa, South East Asia, the Pacific region, and northern Australia.

We use luring and observation for surveillance. Lures consist of syrup or sausage in small jars placed on the ground approximately 5m apart, alternating between the 2 attractants. Lures are placed and collected after 1 hour and ants are identified under a compound microscope by an entomologist. Additionally, trained officers perform a visual inspection to look for and sample any suspect ants.

You can do your part to stop their spread. Check machinery, equipment, pot plants and other sources of soil before you move it.

Tropical fire ants are prohibited matter under the Biosecurity Act 2014. The Act requires everyone to take all reasonable and practical steps to minimise the risks associated with tropical fire ants under their control. If you see an increase of small brown-orange ants that sting and bite, report promptly to Biosecurity Queensland on 13 25 23.