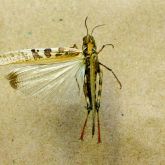 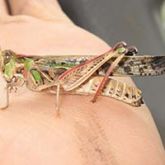 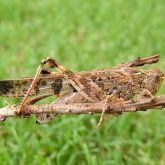 Native to Australia, the Australian plague locust is a grey, brown or occasionally green insect that can attack and destroy crops and pastures. Of all locusts in Queensland, it has the greatest economic impact because of the extent and frequency of outbreaks.

This species breeds successfully after good rains in the Channel Country of western Queensland. Locusts then migrate on prevailing weather systems to invade adjacent agricultural areas, including those in southern Queensland. A high-density swarm covering 2km2 can eat 20 tonnes of vegetation per day.

The Australian plague locust is not a prohibited or restricted invasive animal under the Biosecurity Act 2014.