Have you seen Green iguana?

Be on the lookout for Green iguana and report it to Biosecurity Queensland. Early detection and reporting are the key elements in controlling Green iguana. 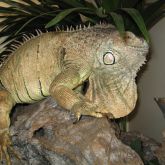 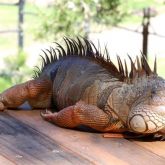 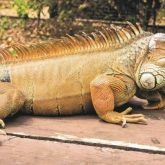 Native to Central and South America, green iguanas are large lizards with prominent dewlaps and spiny backs. In Florida, USA, escaped and released iguanas have established feral populations that damage vegetation, dig burrows, and can be aggressive if confronted by pets or people.

Green iguanas are an illegal pet in Queensland and no wild populations have been recorded in the state. However, they are suited to the climate throughout much of Queensland and could become a pest if introduced. Green iguanas could have adverse impacts on many native species, particularly native lizards.

To prevent green iguanas from establishing in Queensland, restrictions apply to their import, possession and sale.

The green iguana is a prohibited invasive animal under the Biosecurity Act 2014.