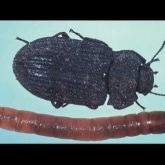 A number of species of soil-dwelling insect pests can seriously reduce plant establishment and populations, and subsequent yield potential.

Other soil insects that may be present but don't damage crops in northern regions include:

Soil pest presence varies with soil-type, season, crop rotations, and other management practices such as cultivation. Control thresholds are usually different for summer and winter crops.

Soil insects are often difficult to detect as they hide under trash or in the soil. Immature insects such as false wireworm larvae are usually found at the moist/dry soil interface.

Spade sampling is most useful for insects such as scarab larvae or symphyla, but is laborious, time consuming and difficult in heavy clay or wet soils.

Bury baits to detect pests such as wireworm. Baiting can be done with germinating seed or other food sources attractive to soil pests (e.g. potatoes or flour). Place baits immediately after planting rain, and position as shown in Figure 1.

If using the germinating grain technique:

Using germinating baits allows you to easily find the baits once germinated (unless they are eaten); however, a major disadvantage is the delay between placing and assessing the seed.