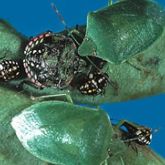 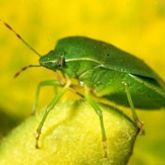 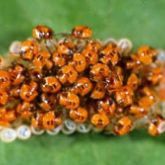 Green vegetable bugs (GVB) attack all summer and winter pulses (except chickpea) and are a major pest of soybeans, especially in coastal areas. GVB is the most damaging podsucking bug in pulses, because of its abundance, widespread distribution, rate of damage, and rate of reproduction.

Nymphs change colour and shape as they develop.

Adult bugs may be confused with:

Parasitised GVB eggs may be confused with predatory shield bug eggs but lack the spines around the top of the eggs.

GVB use their long, thin mouthpart to suck nutrients from the seed (stinging the seed).

GVB also damages buds and flowers, but soybeans compensate for this early damage.

The podding phase of most summer legumes is only slightly longer than GVB´s life cycle, so usually only 1 generation develops per crop, but populations can move progressively from earlier to later plantings, and eventually build to very high levels.

Beat sheet sampling is the most efficient monitoring method:

Edible soybean thresholds are linked to seed quality, and are therefore very low. Crushing and stockfeed soybeans have a higher threshold.

An online calculator for mungbean and edible soybean is available at the Beatsheet.