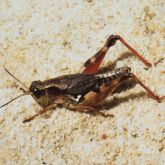 Australia has about 500 native grasshopper species, some of which develop large, localised infestations. These species include:

In Queensland, the wingless grasshopper is the most common grasshopper species to cause damage in field crops and pastures.

Wingless grasshoppers may be confused with nymphs of other grasshopper and locust species.

A wide range of native and introduced herbaceous broadleaf plants, and some native tree species.

Most damage by wingless grasshoppers to pastures occurs in mid-summer and autumn, following moderately dry years. Preferential feeding on the legume component of improved pastures can damage newly established areas so severely that re-sowing is necessary.