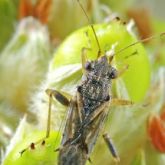 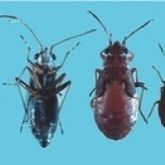 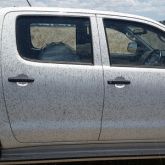 Both species breed on a wide range of native and weed hosts, building up to large numbers in inland areas when winter/spring rainfall promotes growth of native herbs and weeds. In spring, as these hosts dry off, large numbers of adults will migrate on storm fronts into eastern cropping areas.

Use a hand lens or microscope to distinguish between species—RGB looks smooth, while grey cluster bug is hairy.

Crops most commonly affected include sunflower, sorghum, canola and safflower. In years of heavy infestations, the bugs can also be found in other crops, including wheat and legumes.

Impact is greater in moisture-stressed crops.

Rutherglen bug has 8 generations a year:

In cropping areas RGB breed on weeds, moving to available crops or weeds when hosts die off. In seasons when RGB is a major pest, the population is dominated by migrants from inland breeding.

Monitor by beating heads into a bucket or tray:

Egg parasitoids of RGB have been recorded, but are unlikely to provide significant control in high population seasons.

Predation has rarely been recorded, but spiders may play a role.

Local management will have little impact on RGB in seasons of high migration. Managing weeds in and around paddocks prior to sowing can reduce local bug movement onto emerging seedlings.

Repeated influxes of migrating adults can make repeat applications necessary. Nymph movement around the plant may also limit pesticide contact, so insecticides with higher residual values may be more effective in these situations.