Have you seen Fall armyworm?

Be on the lookout and report signs to the Department of Agriculture and Fisheries on 13 25 23.

Early detection and correct identification are the key elements in controlling Fall armyworm. 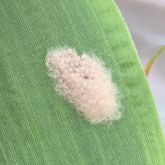 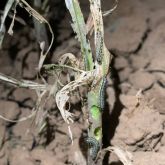 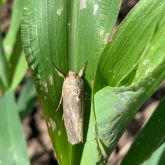 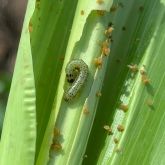 Large fall armyworm in a whorl

Fall armyworm (FAW) reached the Australian mainland in early 2020. It has since spread across much of northern and eastern Australia. Research is underway to determine its likely impact and the most appropriate management approaches under Australian conditions.

A tropical migratory pest, FAW is expected to be present year-round in warmer areas, and for part of the year in temperate zones. Regions with sufficient periods of warm weather may be subject to local population build-up.

While FAW has a very wide potential host range, it has so far shown a distinct preference for grass species with whorls, including maize and sorghum.

Originating in the tropical and subtropical regions of the Americas, FAW is now found in Africa, the Indian subcontinent, China and South East Asia. This migratory pest has the capacity to spread widely in some seasons but is likely to only survive year-round in warmer climates.

FAW has been reported across a wide host range but appears to prefer grasses. The majority of damage in Australia so far has been to maize and sweet corn, with some damage to sorghum.

FAW also have the potential to infest various horticultural crops, pasture grasses and weeds. It has been recorded in sugarcane, cotton and wheat overseas, but there have been no significant reports of FAW in these crops in Australia so far.

In plants with whorls (such as maize and sorghum), larvae can enter the whorl and cause damage from the inside, resulting in ‘shot holes’ that become visible as the leaf unfurls. If the damage is severe, the upper leaf can detach.

Older larvae may also feed on roots and reproductive structures.

Look for the egg masses and clusters of young larvae, and signs of leaf damage. Check in the whorl and around the plant base for larger larvae. Thresholds under Australian conditions are currently unknown, and will be a focus of future research.

Current commercially-available nucleopolyhedroviruses (NPVs) in Australia are specific to helicoverpa and will not work on Spodoptera species; the Department of Agriculture and Fisheries is researching the field efficacy of a Spodoptera variant of this virus.