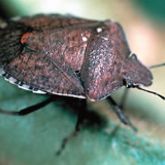 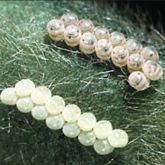 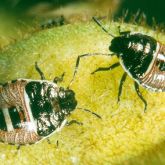 Brown shield bug (BSB) is one of several species known as podsucking bugs. It reduces crop yield and quality by feeding on developing seeds with its piercing-sucking mouthparts.

Adults may be confused with the predatory glossy shield bug, which is glossy and slightly larger.

BSB typically invades summer legumes at flowering, but are primarily pod feeders with a preference for pods with well-developed seeds. Summer legumes remain at risk until pods are hard (i.e. very close to harvest). Damaging populations are typically highest in late summer crops during late podfill (when nymphs have reached or are near adulthood).

Similar to that caused by GVB (potential yield loss, and reduced seed quality), but BSB adults damage only ¾ as many seeds as GVB adults.

Podsucking bugs other than GVB are converted to GVB equivalents, and decisions are made based on the GVB thresholds. An online calculator for mungbean and edible soybean is available at the Beatsheet.

Eggs may be parasitised by the tiny wasp Trissolcus basalis.