This guideline advises licensees and applicants about plan requirements and the attitude the Commissioner is likely to adopt when considering the proposed location of gaming area(s).

This, in conjunction with the following guidelines, replaces Gaming guideline G03: Plans that was issued in 2009:

There are 2 types of plans that may be required with a new gaming application, or a request to change an existing gaming licence. These are whole-of-site plans and gaming area plans.

Gaming machines may only be played if they are installed in an approved 'gaming area'. The gaming area refers to a gaming room, gaming lounge or other area as defined on the plans and approved by the Office of Liquor and Gaming Regulation (OLGR). (Refer to Gaming guideline G09: Gaming area plans for more specific guidance on preparing the gaming area plans.)

The following applications require plans to be submitted:

Note: You will not need approval from OLGR if you are repositioning gaming machines within your currently approved gaming area, provided that the disconnection and reconnection of machines is done by a licensed repairer through your licensed monitoring operator (LMO).

Architect-drawn plans are recommended, but not essential. However, freehand drawn plans are not acceptable. Plans should be clearly marked with the name of the premises.

When preparing plans, you must consider the following matters.

A premises may have more than 1 gaming area. The gaming area(s) must be shown on the whole-of-site premises plan either by hatching or shading (do not use yellow highlighter).

Gaming must not be the dominant function of a commercial hotel or commercial special facility licence application. The following matters are also considered when approving plans

Where the gaming area is located in a dedicated room or screened off area, it is anticipated that the proposed gaming area marked on the plan will extend to the structural boundaries of the area (however created, e.g. walls or screens).

Gaming rooms that stand alone in separate structures are generally not considered appropriate.

Schedule 2 of the Gaming Machine Regulation 2002 (the Regulation) does not allow ATMs be located in, or in close proximity to, the gaming area. Refer to Gaming guideline G10: ATM and EFTPOS machines.

There should be no direct street access to the gaming area. Where this is unavoidable, a screen or wall erected between the gaming area and the street may be considered to provide adequate separation by creating a foyer. The foyer should be included in the hatched or shaded gaming area marked on the plan.

Patrons should not be required to travel through the gaming area to access toilets, ATMs or the majority of the premises' facilities.

Each gaming machine must be supervised at all times when machines are operating. Refer to Gaming guideline G11: Supervising gaming machines.

Child-minding facilities should not be located directly adjoining, or with direct access to, the gaming area. Applicants may be asked to provide information on the operation of these facilities to ensure children are not left for prolonged periods.

Schedule 2 of the Regulation requires licensees to ensure that no gaming equipment (including jackpot signage) is readily visible to passing pedestrians.

Following is an example of a whole-of-site plan showing the gaming area in relation to the whole venue.

The top of the image shows the example plan details: the club name, licence number and scale.

Text box 1 reads: Please ensure that the plan clearly displays the name of the premises, its licence number and the scale to which the plan has been drawn.

Text box 2 reads: The immediate surrounds of the establishment should be marked on the plan, particularly in relation to doorways etc.

A horizontal block shows the adjoining street to the premises, and the right vertical edge of the plan shows a section for a carp park and greens.

The premises is divided into 3 main areas: bowler's bar, bistro and gaming area. There are also 2 toilet sections, and a back of house area for staff, cold room, kitchen and bar.

Text box 3 reads: Patrons should be able to access toilets without going the gaming area.

Text box 4 reads: All ATMs must be marked on the plan, they must not be in, or in close proximity to the gaming area and should be visible from the gaming area.

Text box 5 reads: Licensees must ensure that staff have a constant ability to see the face of each gaming machine on premises. This may require the placement of mirrors, or CCTV monitors, in a position visible from the bar. However, you are not required to mark these supervisory aids on the whole-of-site plan.

Text box 6 reads: Each functional area of the premises should be labelled on the plan. Where there are no structural boundaries defining these areas, a dotted line may be used. Where areas are combined, they should be labelled as such (e.g. Bar / Bistro).

Text box 7 reads: The gaming area must be hatched or highlighted and must not show the individual location of gaming machines. Please do not use a yellow highlighter.

Text box 8 reads: Your plan need not show tables, chairs, benches etc. These are shown here to demonstrate that the gaming area may include other facilities.

Download a larger version of the sample whole-of-site plan 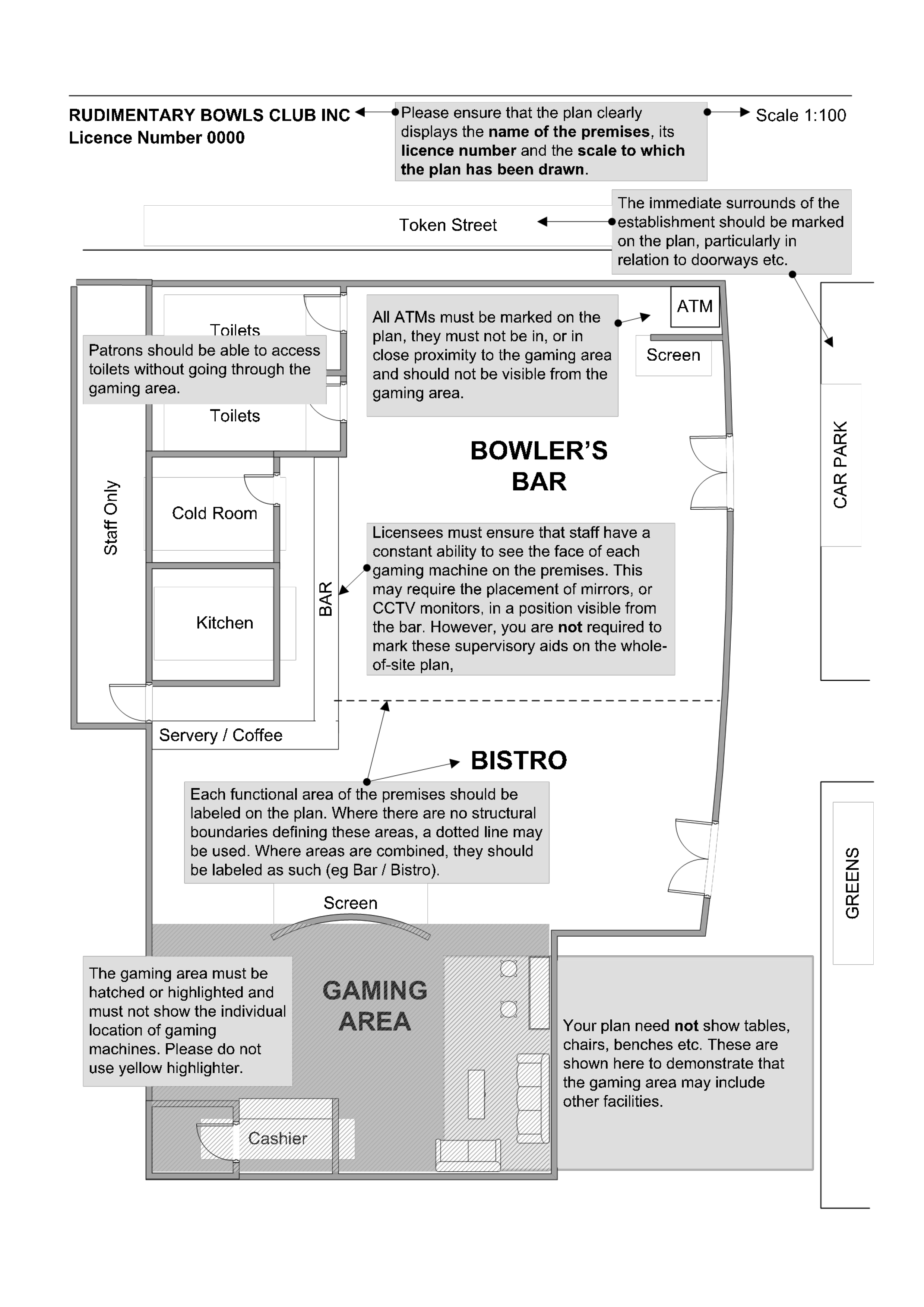 OLGR officers cannot make amendments to plans and will return inadequate plans to the applicant to be amended. Applicants should ensure that plans meet all of the requirements.

Hard copy plans should be in A3 format. Larger plans must be reduced by OLGR prior to approval, thereby delaying the approval process.

Following investigation and approval of any associated application, OLGR will retain the whole-of-site plan as the site's 'current approved plan' showing the gaming area(s). A copy will be provided to the applicant with the endorsement of OLGR clearly visible.

This copy must be kept in a safe place for future reference as the need arises.

Requesting a copy of approved plans

OLGR will only provide a copy of an approved site plan to the legal entity that lodged the plan, provided that entity remains an applicant for, or licensee of, the premises. Requests must be made in writing on the entity's letterhead and signed by directors of the company, or by members of the club's board.

For more information, contact OLGR on 13 QGOV (13 74 68) or email OLGRLicensing@justice.qld.gov.au.