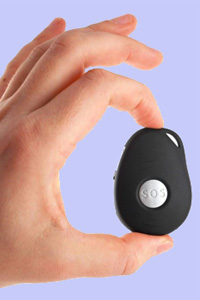 Personal alarm system provider SureSafe, has achieved 80% growth in revenue as a direct result of their expansion into the disability market through the National Disability Insurance Scheme (NDIS).

An established provider of in-home and personal/medical alarms to elderly Australians over many years, owner and Director Joel Groth could see how the SureSafe technology and innovation would also support the goals of people with disability.

'The NDIS is about helping people with disability pursue their goals and participate in daily life in their communities. We saw how our product could support that,' Joel said.

Based on the Gold Coast, Joel first became aware of the NDIS and the potential to expand his business into the disability market in 2014 and began to plan the business model.

Following several months of intensive research to develop a clear understanding of the Scheme and the disability sector, the company invested in a new product aimed at helping people with disability achieve their goals through improved independence and safety, and became the exclusive supplier of SureSafeGO 'Anywhere' in Australia.

SureSafe registered as an NDIS provider and began testing the market in early NDIS trial sites in New South Wales in 2015 – the SureSafeGO 'Anywhere' mobile device was launched.

The volume of sales during the trials confirmed the potential demand for the product regardless of disability, age, or location. The SureSafeGO 'anywhere' mobile device has shown its application in any number of situations, such as going to the shops, catching public transport, or at work.

The company has a web-based business model and a central and personalised customer service centre, and has since expanded into the disability market in Victoria, South Australia, Western Australia and the Australian Capital Territory.

SureSafe is forecasting a further 80% growth in 2017–2018 as their focus turns to the rollout of the Scheme in Queensland.

'We will continue to explore NDIS market opportunities and look at new products to support people with a disability to achieve their goals,' Joel said.