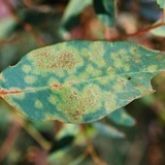 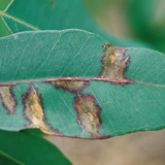 Some leaf spots enlarge and eventually may cover the leaf 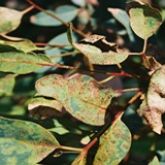 Kirramyces leaf diseases are a group of fungal leaf pathogens that infect mature and immature foliage in some eucalypts. They can cause severe defoliation in young trees and may become a significant problem in some hardwood plantations.

Four species of Teratosphaeria are known, some of these were previously referred to as Kirramyces species. They have different hosts, disease symptoms and known distribution.