Gumleaf skeletoniser larvae can cause severe skin irritation to humans on contact. 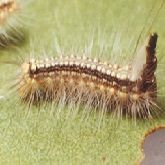 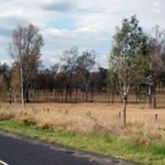 The gumleaf skeletoniser (Uraba lugens) is a common pest of eucalypt trees. Periodic outbreaks completely defoliate trees, causing widespread damage. Initially, foliage on affected trees has a typical bronze appearance, as if the tree has been scorched by fire.

Outbreaks often occur during the winter, with most damage in late winter to early spring.

Can be distinguished from other hairy caterpillars found on eucalypts by the: