Guide to animal diseases and disorders

Foot-and-mouth disease is prohibited matter under the Biosecurity Act 2014.

FMD outbreaks are common in Asia, the Middle East, South America and parts of Africa. In May 2022, an outbreak of FMD was reported in cattle in Indonesia and in July 2022 in Bali.

International outbreaks are a reminder that animal diseases can spread quickly and do not respect international borders.

FMD is not present in Australia. In the event of an outbreak early detection and reporting would be critical to rapidly contain this disease.

Be vigilant and look for signs of foot-and-mouth disease in your livestock.

Under Queensland legislation, if you suspect the presence of this disease in any species of animal, you must report it to Biosecurity Queensland on 13 25 23 or contact the Emergency Animal Disease Watch Hotline on 1800 675 888.

Prohibited pig feed must not be fed to pigs as it can introduce foot-and-mouth disease and other emergency animal disease.

Visit the eHub for more information and resources about emergency animal disease preparedness. 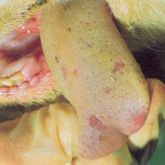 Further examples of 2-day-old lesions, in this case on a sheep’s tongue. 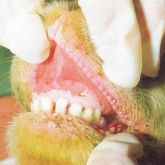 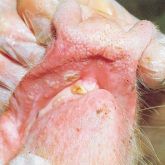 A highly contagious viral infection of domestic and wild cloven-hooved animals (the hooves are divided into 2 parts). Horses are not affected.

FMD has not occurred in Australia since 1872. It is found in the Middle East, Africa, Asia and South America.

For the purposes of the World Organisation for Animal Health (OIE) Terrestrial Animal Health Code, the incubation period is 14 days.

A wide range of signs can occur, ranging from inapparent disease with minimal lesions to severe clinical disease. It is extremely contagious and many animals on a farm may become affected simultaneously.

In sheep and goats

FMD is considered one of Australia's greatest biosecurity risks.

An FMD incursion would have severe consequences for Australia's animal health and trade, including considerable economic losses with restrictions being placed on both domestic and international markets.

Even an isolated, rapidly controlled outbreak could cost several billion dollars to eradicate, with serious economic and social effects in other sectors, including tourism.

Impacts would be felt across the live animal export trade, and by exporters of genetic materials, meat and dairy products.

FMD is one of the most contagious animal diseases. Infected animals excrete the virus in fluid from ruptured blisters, exhaled air, saliva, milk, semen, faeces and urine. Virus transmission can begin before blisters appear.

The primary method of transmission within herds and flocks is by direct contact or via respiratory particles and droplets. Pigs are potent excretors of airborne viruses. Spread of infection between properties and areas is frequently due to movement of infected animals or contaminated vehicles, equipment, people and products. Windborne spread of infected aerosols can occur under the right conditions.

Risk of entry into Australia

Pathways for the introduction of FMD into Australia include importing:

Because Australia has strict import conditions in place, the introduction of FMD through the legal importation of these commodities is very unlikely. However, the illegal introduction of contaminated meat and dairy products that could be brought in by passengers on aircraft or ships, or sent through the post, has been demonstrated to be a real and significant pathway.

Feeding or providing susceptible animals access to contaminated materials is the most likely means by which FMD may infect the animal population. Accordingly, the feeding of animal matter or feed that has been contaminated by animal matter (i.e. also known as swill) is illegal in Australia.

Windborne spread to Australia from infected near neighbouring countries, is considered possible but of low likelihood due to the distance and prevailing weather conditions.

FMD virus may remain infective in the environment for several weeks to months:

Although the virus is inactivated within 3 days in carcasses that have undergone normal post-slaughter acidification, it can remain viable for months in chilled lymph nodes, bone marrow, viscera and blood clots. The virus have been detected in the milk and semen of experimentally infected cattle for 23 and 56 days, respectively.

An outbreak of FMD in Australia is most likely to be caused by food contaminated with FMD virus being illegally imported and fed to pigs.

Preventing these illegal activities is the best way to prevent an outbreak in Australia.

If you know of prohibited feed being fed to pigs, report it to Biosecurity Queensland on 13 25 23.

Suspect cases of FMD will be investigated by a veterinary team. Where appropriate, samples of vesicular fluid, epithelial tags and blood will be collected from representative animals and forwarded to the Australian Centre for Disease Preparedness at Geelong for diagnostic purposes.

If the disease is detected, it will be contained and eradicated as quickly as possible in order to reinstate Australia's disease-free status for trade purposes. The eradication program will be delivered according to the AUSVETPLAN response strategy for FMD.

The following will occur if FMD is detected: