Pests, diseases and disorders of animals 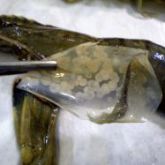 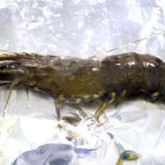 The virus that causes white spot disease does not pose a risk to food safety or human health, so prawns are safe to eat.

The disease was confirmed in 2016 in 7 prawn farms located on the Logan River. This was the first confirmed case of white spot disease in Australian prawn farms.

The virus that causes white spot disease has been found in a number of wild-caught prawns and crabs taken from the Logan River region and Redcliffe Peninsula in Moreton Bay.

White spot disease has the potential to cause significant financial impact to the farmed prawn industry.

The farmed prawn industry in Queensland is worth approximately $80 million annually, with strong growth predicted in the coming years. The gross value of prawn production in Australia in 2016–17 was worth $396 million.

The disease is primarily spread through the movement of infected animals or contaminated water. Birds that feed on and move infected animals can spread the disease. Marine worms have been implicated as potential carriers of the disease overseas, although negative results from extensive testing of worms in Moreton Bay indicates that the risk is extremely low.