The search is on for electric ants. Register for a free yard check today and help eradicate electric ants from Far North Queensland.

The electric ant treatment process is quick, effective and safe for humans and pets.

Broadcast baiting is used as an effective means of distributing bait for electric ants. It is collected by the worker ants and taken to the queens of colonies in the vicinity. It can affect colonies not visible to field officers, and is a quick method of covering broad areas. 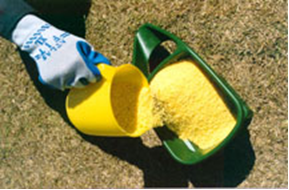 Broadcast ant baits are made of small pieces of corn grit (about 1–3mm) that are soaked in soybean oil and either the metabolic inhibitor hydramethylnon or the insect growth regulator S-methoprene. Both products have low-toxicity to humans and animals and are non-residual, meaning the chemical breaks down quickly. The baits contain less than 1% active insecticide.

Hydramethylnon is a slow-acting insecticide which is especially effective against the queen ant. Worker ants will find the bait granules, carry them back to the nest and pass them to the queen and other nest-mates. Hydramethylnon works by disrupting the metabolic processes of the electric ants, preventing the ants from digesting food. Ants that have ingested these baits die in approximately 72 hours.

Baits containing the insect growth regulator S-methoprene interfere with the growth or development of ants by deteriorating the reproductive organs of the queen and affecting larvae development. The lack of worker replacement results in colony death as the existing worker ants age and die. Within 3 to 4 weeks there is substantial colony mortality and within 8 weeks the majority of the colony has been eliminated.

Residents should not irrigate treatment areas for 24 hours before and after application as water can wash out the insecticide making the bait ineffective.

While it is quite safe to walk on ground that has been treated, it is recommended that areas are left undisturbed for at least 24 hours before and after application to maximise uptake of the bait by the ants. Landholders should not handle or make contact with the bait. If contact occurs, wash hands (or contact area) well. This bait may irritate the eyes.

The bait treatment is not harmful to humans or animals, as it is specifically targeted at electric ants. After the baits are distributed, they rapidly break down in direct sunlight.

The baits are used according to the conditions prescribed on the relevant product labels and permits from the Australian Pesticides and Veterinary Medicines Authority to ensure safety to humans, animals and the environment.

The baits pose no risk to pregnant women or unborn babies. Scientific testing does not indicate that these insecticides can cause birth defects. However, it is always important to minimise exposure to all chemicals during pregnancy.

Exposure to active chemical is likely to be very low, particularly after a day or more has passed since the bait was applied. As these chemicals are of very low toxicity, no adverse effects would be expected if any bait were to be swallowed. However, if you have any concerns, seek medical advice from your family doctor.

If you think someone has become sick as a direct result of electric ant baits, ensure that medical advice and attention is sought from your doctor. Notify Biosecurity Queensland by calling 13 25 23, after consultation with your doctor.