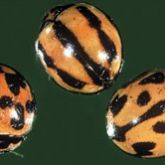 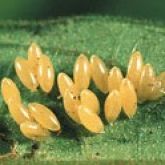 A raft of ladybird eggs

Widespread. The presence of adult ladybirds in crops is often an early indicator of aphid activity.

Both adults and larvae are voracious feeders on target species.

After hatching, most ladybird species pass through 4 immature stages before pupating and developing into the commonly recognised round orange beetle patterned with black spots or stripes.

Refer to the impact of pesticides table in the current issue of the Cotton Pest Management Guide for information on ladybird sensitivity to various pesticides.