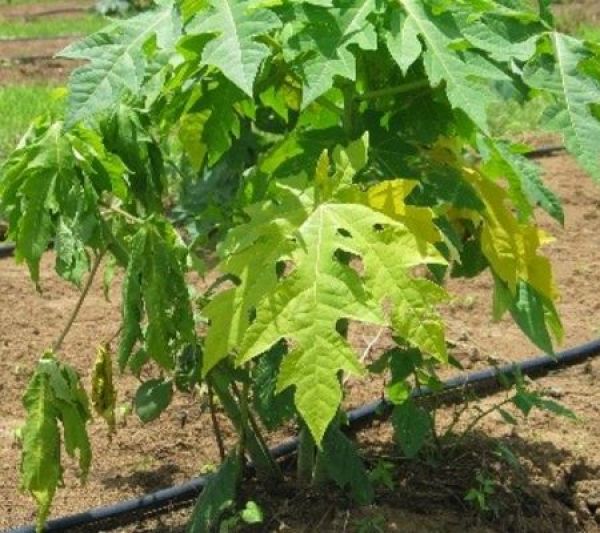 In many papaya growing countries of the world, Phytophthora is a major constraint to the long-term viability and productivity of the industry.  The diseases caused by this pathogen include damping-off of seedlings, root rot, stem-rot and fruit rot.

Papaya plants of all ages are susceptible to Phytophthora root rot but seedlings up to 2 months old are most susceptible. Leaves of affected plants turn yellow, wilt (Figure 1) and eventually drop prematurely. Root rot generally originates as minor lesions on smaller lateral roots which quickly develop into a major rot of the tap root (Figure 2) making trees unstable and prone to damage during high winds.

Phytophthora is also known to cause stem or trunk rot following severe storms and cyclonic events. Brown sunken cankers occur on the stem (Figure 3) and if favourable wet weather for disease development prevails the upper portion of the plant will collapse due to the expanding rot.

Immature and mature green fruit infected with Phytophthora develop water-soaked lesions and if conditions remain favourable for disease development, fruit become covered with off-white mycelium of the pathogen (Figure 4). Infected fruit falling to the ground are considered a major source of the disease.

The pathogen is a soil-inhabiting water mould and requires water for spore production and fruit infection. The disease is generally confined to wet areas where rapid disease development can occur. The spores of the pathogen move through the soil during rain or irrigation until they contact roots or splash on to fruit. Warm, wet weather favours infection and disease development.

Excessive soil moisture and ambient temperatures of 20–300C are known to enhance infection and disease development. The most important environmental factor influencing Phytophthora root rot is the duration of saturation or near saturation of soil. Soil conditions such as these are also known to favour a high level of disease. Temperatures of 25–300 C and fruit wetness periods of 72 hours or more are known to provide excellent conditions for the development of the off-white fungal growth associated with Phytophthora fruit rot.

These include over 150 plant species and include major horticultural commodities such as cacao, durian, vanilla, custard apple, coconut, breadfruit, orchids, tomato, strawberry, onion, and fig.

Cultural and chemical measures are used to manage Phytophthora diseases of papaya.

In addition to the cultural and chemical control measures already mentioned, preventive fungicide sprays in the field have been shown to manage Phytophthora fruit rot.

Check the Australian Pesticides and Veterinary Medicines Authority database for chemicals registered or approved under permit to treat this pest on the target crop in your location. Always read the label and observe withholding periods.