Queensland produces about 20% of Australia's chicken meat, contributing more than $580 million to the state's economy.

Chicken meat production has grown strongly over the past 5 years, averaging 10% growth each year. The industry is forecast to experience similar growth into the future.

In 2015-16 about 137 million chickens were processed in Queensland, producing 245,000t of chicken meat. Almost all chicken meat produced in Australia is consumed locally. Australians on average consume around 45kg of chicken meat per person per year. Chicken is the highest consumed meat protein, ahead of beef, lamb and pork.

The following graph represents the growth of Queensland's chicken meat industry over the past decade. 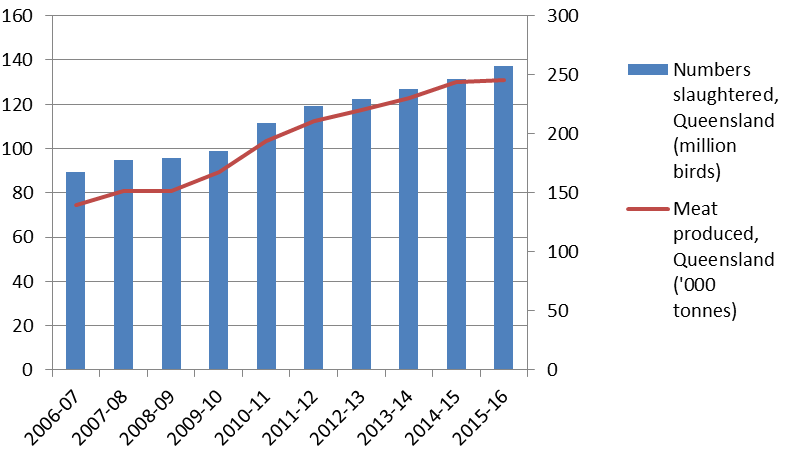 Chicken meat is mainly grown for the domestic market, with very little poultry meat exported. This is mainly due to the nature of poultry product food safety and the high domestic demand for chicken meat in Queensland.

Increasing consumption of poultry meat, combined with improvements in the genetics of poultry birds and processing efficiencies, have contributed to the strong growth of Queensland's poultry industry.

There are 2 main hybrid breeds used in Australia for chicken meat – Cobb and Ross. These breeds have been selectively bred for their growth, feed conversion (i.e. ability to convert feed into meat) as well as a number of other traits that are beneficial for bird health and welfare.

The genetics come from overseas and are imported as fertile eggs where they are incubated and hatched under strict quarantine procedures. These chickens become the great grandparents of the chickens that are raised for human consumption. Find out more about the chicken family tree.