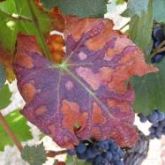 Advanced symptoms of Pierce's disease on a merlot grapevine leaf 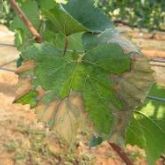 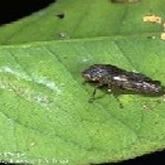 Pierce's disease, caused by the bacterium Xylella fastidiosa subsp. fastidiosa, is one of the most significant exotic threats to Queensland's grape-growing industries. This bacterium lives in the xylem (water conducting system) of grapevines. It is spread between plants by sap sucking insects, most commonly leafhoppers known as sharpshooters.

The glassy-winged sharpshooter (Homolodisca vitripennis), which is also an exotic plant pest, is the most efficient vector of Pierce's disease.

In the past, Xyllela fastidiosa has been widely reported to have a very large host range, up to 150 plant species. In recent years, improved detection and identification techniques have determined the existence of a number of subspecies (strains). The host lists of these subspecies are still under active research, but several subspecies, including Xylella fastidiosa subsp. fastidiosa, are well defined (especially with regards to commercial crops) and are now known to infect only a subset of the larger list of hosts. However, some host plants can be infected by more than one Xylella fastidiosa subspecies.

Xylella fastidiosa is currently being research, which may result in further changes to various subspecies in the future.

Recent changes in our understanding of the species has clouded the usefulness of many older host studies, which do not recognise the various subspecies.

Other proposed subspecies of Xyllela fastidiosa:

Fruit production is severely reduced, with leaf scorching and wilting leading to shrivelled unsaleable fruit. The disease can be so severe that it can kill commercial grapevines within 1–4 years.

All host plant growth stages can be affected.

In order to distinguish Pierce's disease symptoms from other grapevine problems, look for a combination of any of the following:

Pierce's disease of grapevines has been reported from parts of North, South and Central America, Taiwan and Italy.

The host range for Pierce's disease of grapevine caused by Xylella fastidiosa subsp. fastidiosa includes table and wine grapes (Vitis vinifera) as well as a broad range of ornamental and wild Vitis species.

As well as infecting grapevines, Xylella fastidiosa subsp. fastidiosa has been reported to cause other diseases of varying severity in a range of trees and shrubs, including:

Xylella fastidiosa subsp. fastidiosa lives in the water-conducting cells of host plants. It is transferred from plant to plant by insects that are capable of carrying the disease in their mouthparts (vectors), of which the glassy-winged sharpshooter (Homolodisca vitripennis) is the most efficient.

Several other (more minor) plant sucking insects are known to be able to carry and transmit Pierce's disease. The ability of Australian native leafhoppers (and other xylem-feeders) to transmit the bacterium is unknown.

Australian grape production contributes significantly to Australia's economy, jobs and local communities. About 1,000 growers produce table grapes, much of which is exported. In 2015–16 Australian table grape production was valued at $431 million. During the same financial year, over 5,000 wine grape growers grew grapes which, once made into wine at 2,300 wineries, generated export sales valued at $2.56 billion in 2017. It is estimated that wine grapes contribute $40 billion to the Australian economy annually. (Source: Plant Health Australia – table grapes, wine grapes).

Pierce's disease has the potential to devastate Australian grape production, especially if it arrived in combination with its key vector, the glassy-winged sharpshooter. A 2017 Australian Bureau of Agricultural and Resource Economics and Sciences study estimated that the economic impacts of X. fastidiosa on Australian grapevine industries could be in the order of $2.8–7.9 billion.

Internationally, the immediate impacts of Pierce's disease include significant reductions in fruit and juice quality and quantity, with affected plants usually dying within several years of infection, and the death of entire vineyards quite common.

The presence of Pierce's disease may also have interstate and international trade implications for fresh fruit and other plant product exporters and propagation nurseries, within Australia and internationally.

Backyard growers would also be affected.

Spread from plant to plant is by xylem feeding insects, such as the glassy-winged sharpshooter. Although the glassy-winged sharpshooter is not known to be present in Australia, there are many other xylem feeding insects here that may be able to spread the disease. These insects include members from the sub-order Auchenorrhyncha, such as leafhoppers (Cicadellidae), spittlebugs and their relatives (Cercopoidea) and cicadas (Cicadoidea).

When introduced by insects, disease symptoms generally appear first on the windward (side facing the prevailing wind) edges of vineyards. The disease then moves along the rows where plants touch each other.

Depending on flight capacity of the specific species, insect vectors can spread Pierce's disease from vineyard to vineyard within production regions.

Using infected rootstock or scion material can also transmit Pierce's disease. When introduced this way, the symptoms often appear randomly across the paddock depending upon where the infected material was used.

Pierce's disease is not spread by cutting tools or on other surfaces.

The main method of long distance spread is by the illegal importation and movement of infected planting material or through the movement of plants or fruit infested with insect vectors like the glassy-winged sharpshooter that are carrying the disease.

The Australian Government closely regulates and approves importation of host plant material that may contain Xylella fastidiosa or its insect vector, and monitors for illegal plant movement. This helps to prevent the introduction of diseases such as Pierce's disease into Australia.

The potential for long distance spread of Pierce's disease by infected insects being blown in extreme weather events is unclear. Although theoretically possible, it has not been previously reported.

Pierce's disease is not seed transmitted.

The biggest risk period for spread is when plants are actively growing and insect vector populations are likely to be high.

Refer to the Biosecurity Manual for the Viticulture Industry for specific advice on how to monitor for exotic grapevine pests and diseases.

Refer to the Wine Australia website for advice on how to recognise and manage endemic grapevine pests and diseases.

There is no cure for Pierce's disease. In the United States of America, the movement of items capable of distributing Pierce's disease and its vectors (such as glassy-winged sharpshooters) are strictly regulated.

By law, everyone has a general biosecurity obligation (GBO) to take all reasonable and practical steps to minimise the risk of spreading this disease.